Our Last Full Weekend In GI...Sigh... 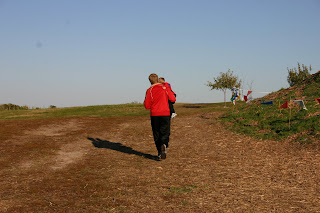 Walking away...walking uphill.
We spent the last weekend here in GI hanging out as a family. Saturday, after naptime, we went out to the Scarecrow Patch for the third time this year. After that, we decided to run into Boelus to eat at the Gold Nugget. It was a very fun and very spontaneous day. And to add to the spontaneity, Emily and Dan made a last-minute trip down to see us on Sunday since we're going to be about 5 hours away from them now. My camera battery died on Saturday and I forgot to recharge it, so Dan is sending me pictures of their visit. 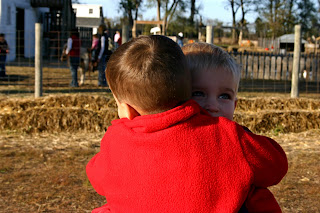 We ran into Owen at the scarecrow patch. He gave Jack a hug because he was so happy to see him. We are going to their house tomorrow night for pizza. They've been really good friends to us and we'll miss them greatly. 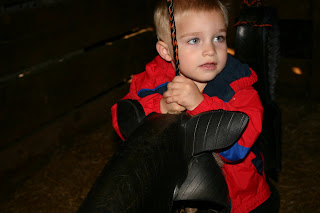 Swinging in the barn. 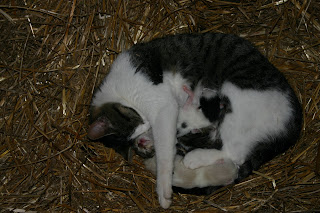 We saw a mama kitty and her babies in the barn. Jack could not have cared less. 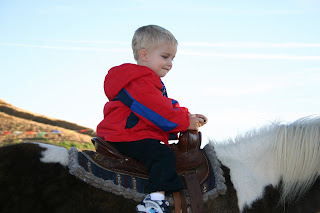 Jack rode the pony around the pond. The lady walking the pony said he was very talkative. Lawd knows what kind of stories he told her. 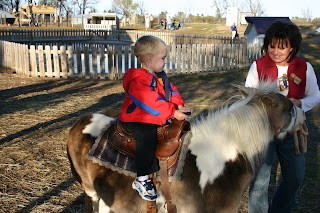 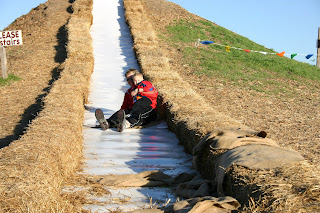 Holy mac, we were bookin'! 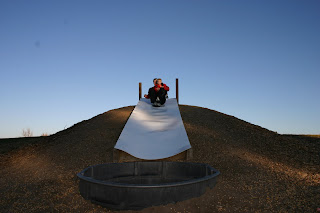 This slide drops you into a big container of corn. I was picking corn out of my shoes for about five minutes after this. 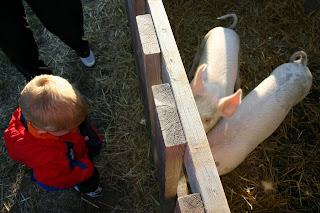 These pigs were touch too friendly for my liking. While I was taking the picture, one tried to lick the camera. Those oinkers will eat anything. 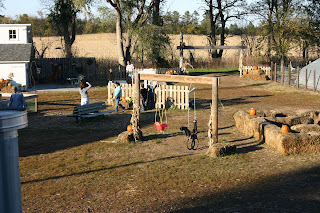 The activities are endless out there. What a good time. 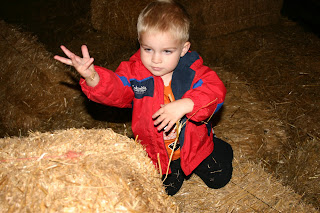 I think he was climbing up the bales to go down the slide, but we'll say he was doing "The Macarena" and leave it at that.

Well, I think it is time to make an official announcement since the cat is pretty much outta the bag on this one.
The Vrbi are packing up the house right now and moving to Palisade on November 1. It has always been a wish for us to live closer to family, but for six years the jobs just never really aligned themselves correctly. Well, lo and behold, it worked out for us to move this time. We are tremendously excited.
We have had a great six years here in Grand Island, surrounded by amazing friends. It has been an overwhelmingly enriching experience for us and we know we will keep in touch with those close friends we've made over the years. But as we've watched several friends move away, we realize we can be friends with people even though we don't live in the same town. In fact, some of our best friends live hours away (I'm not naming names, but the Wades, Hickenbottoms and Greenwoods know who they are!) and we have even more here in town that we'll visit regularly.
I have accepted a position at the Wauneta Breeze newspaper (where I worked right before I moved here; BEST JOB EV) and Amy will eventually be the speech pathologist at Wauneta-Palisade, Imperial (Chase County) and Hayes Center Schools whenever she is released from GIPS. We are currently waiting on word about her release. They had a candidate in mind, but no news yet. If she is not released by next Friday, Jack and I will move and set up house and she'll join us as soon as is legally possible.
That's the news! Stay tuned.

Amy's back on the weight-loss wagon. Check it out.... 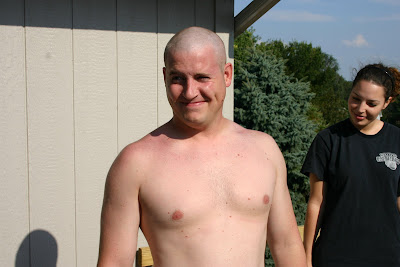 We wanted to make sure everyone was saying plenty of prayers for Jack's Uncle Jake to return safely from his second tour of duty to Iraq. He left about a week or so ago and his mission this time is a little more risky. We've talked to him and he's in good spirits, but this trip is especially tough for him (and us) this time around. He's in our hearts and on our minds all the time and we need your prayers for a safe tour.

If You're Voting Here In Nebraska

Amy and I did our early ballots here in Nebraska and turned them in today. Thankfully, in doing them at home, we had more time to really research what we were voting on as far as amendments.
Because of this research, we feel obliged to inform you about Amendment 424.
We have done a lot of research on Amendment 424, which will appear on the ballot on November 4th. This initiative is intentionally worded very deceptively! It makes it sound like it's civil rights friendly, but IT IS NOT.
Basically, this is a proposed ban on affirmative action and it's being pushed by extremists from outside of Nebraska. It is meant to divide communities and deny equal opportunities. It works against equal rights. It could eliminate scholarships to our community and state colleges and the University. It threatens women-owned businesses, funding for domestic violence programs and women's health initiatives.
It could have a lot of negative impacts and risk the continuation of many other education, business development and public health programs!
I don't want to tell you how to vote, but I strongly urge all of you to do your research on this Amendment!
The Vrbi vehemently oppose Amendment 424! 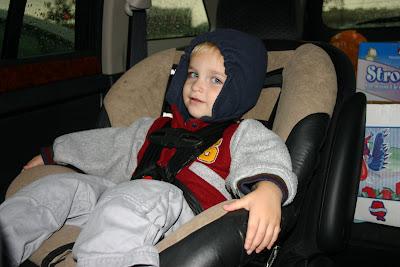 We went to the scarecrow patch last weekend. Jack got up from his nap and we took off for the countryside by St. Libory. It wasn't really all that cold, just drizzly. Fall weather has mos def set in. I love the fall though, so you're not gonna hear me bitchin'...well, about that anyway... 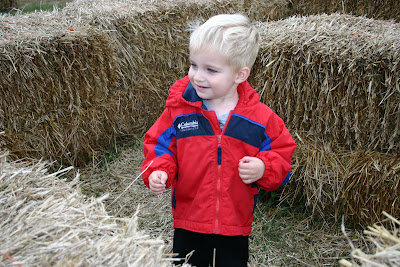 We were there for about 45 minutes, which allowed us to do the straw bale maze, the pumpkin chucker, pet some animals and have a good time. Then it started raining so we left...without a stinkin' pumpkin. Redick. 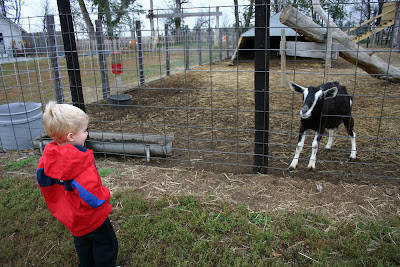 This goat LOVED Jack. He kept sticking his head through the fence to play with us. We weren't sure whether to let Jack get too close. He went right over and petted him. Can goats hurt you? I have no idea. Shameful. 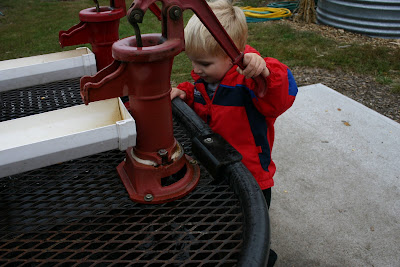 We got the rubber duckies racing with the pumps. 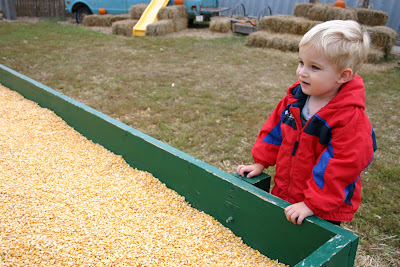 Wuv corn? Yes, I realize Jack has Ted Koppel hair here, maybe even a little on the Trump-ish side. He is scheduled for an Extreme Makeover: Hair Edition this week. Fear not. We're not dirty hippies or nothin'. 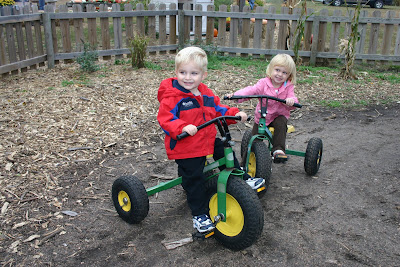 And while we were there, we ran into Brooklyn from Jack's daycare. They were happy to see each other and were pretty content to ditch the 'rents and play together. It was Brookie's third birthday party there for her family so we inadvertently crashed the sucker. They had fun...and that's pretty much all that matters.

My 'little' brother, Joe (Broseph), and his wife, Sarah, had a little sister for Peyton Elisabeth last night at 9:56 p.m. Her name is Sawyer Jane Vrbas and she is my fifth niece total. Now there are five boys and five girls in Grammy Tami's and Papa Jerry's grandkid crew!

I don't have any stats yet, but I'm told she has strawberry blonde hair and is very chubby! I can't wait to see pictures (hint, hint). I'll keep you posted and update with a picture as soon as I can. We're so excited to meet her this weekend.

UPDATE: Joe and Sarah have posted pictures and stats of Sawyer on their blog, Peyton's Place (hmmm...they might have to change that sometime). Check her out. She's a beaut!

Click here to visit Peyton's Place. Or here to see pictures of her on Missy's blog.

UPDATE TO THE UPDATE: You can also view pics at my mom's blog by clicking here!

I FINALLY updated Dave Ja Vu, Part Two this morning. I had to get something off my chest, or else it was going to make my brain implode.

We will have a great many photos to upload this weekend, so stay tuned for that! I promise I'll get better about this blogging thing. No...really... I will.